20th Anniversary of "Rebirth in the Swamp"!

As Bama players had come off of a recent upset to Louisiana Tech they needed to rally together and focus on winning football games.  The team’s seniors, including Shaun Alexander (#37) and Chris Samuels (#60), helped do just that.  Bama met the third-ranked Florida Gators in the Swamp on October 2, 1999.  The entire game was a battle – Florida’s scores came on quick-strike attacks, and Alabama answered with controlled marches down the field.  Neither team was able to establish dominance.  The scored was tied 33-33 at the end of regulation.  In overtime, Florida scored a quick TD, but missed their extra point.  Alabama responded with a touchdown, but also missed their extra point; however, a flag was thrown on the play, and Bama was given another attempt – the extra point was good!  Alabama had beaten the Florida Gators, breaking their 5-year, 30-game winning streak in the Swamp.  This exciting Tide victory announced the ‘rebirth’ of the 1999 team and Alabama’s dominance in the world of college football.

Each Collegiate Classic print is hand-signed by the artist, has an image area of 8"x10", and is framed in our Oyster/Crimson mats and Mahogany with Gold Lip (1½") frame.  Please allow 7-10 business days for completion of custom-framed orders. 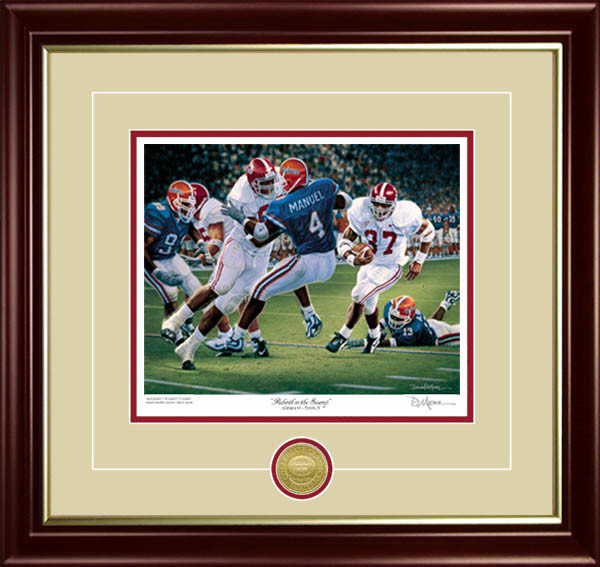