2005 Sports Artist of the Year

Throughout the world, there are many talented artists within the sport art profession.  And though many have refined their craft, only a select few are chosen for honor and recognition by the United States Sports Academy.  In 2005, Birmingham, Alabama based sports artist, Daniel A. Moore was added to the list of 21 international artists (at that time) previously named "Sports Artist of the Year" by the United States Sports Academy, located in Daphne, Alabama.  He now shares a place with other accomplished sports artists, including named like Charles Billich and Stephen Holland.  It is through hard work, thousands of hours painstakingly devoted to detail and his renowned talent that Moore has been honored with this prestigious title.

According to the Academy, the title of Sports Artist of the Year is "presented to an individual who captures the spirit and life of sport so that future generations can relive the drama of today's competition."  Both sports fans and art collectors alike can attest that Moore certainly captures the spirit of southern football tradition, as well as the spirit of other college and professional sports.  His vivid, realistic portrayals of great moments in sports history bring each of his remarkable works to life.

Not only was Moore presented with the award on January 27, 2005, the American Sports Art Museum and Archives (located at the Academy) hosted a public art show in his honor.  Many of Moore's original paintings were on display, as well as the first 26 of his new (at that time) watercolor paintings for his upcoming book, Iron Bowl Gold.  The book encompasses the history of the Iron Bowl at Birmingham's historic Legion Field from 1948-1988, and features 41 original watercolor works by Moore.  Commentary from renowned broadcaster Keith Jackson, as well as selected articles from the Birmingham News, offers insight into each historic play Moore captures.

"I am blessed to receive this honor and to be able to work in the two fields I most deeply love, sports and art," Moore said to the large crowd gathered to hear his acceptance speech.  "...Most of all, I would like to thank the good Lord, the 'Master Artist' for both the gift of art and the gift of patience, enabling me to fulfill my calling."

For more information about Moore's award, or to view a slideshow from the January 27th ceremony, please visit www.asama.org. 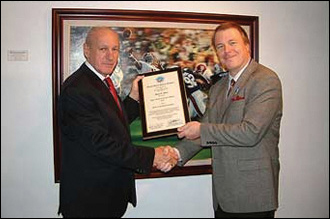 Daniel A. Moore was recognized as the 2019 Distinguished American Sportsman. Mr. Moore is renowned nationwide for his photo-realistic sports paintings. He has established himself as a chronicler of sports history with his unique ability to capture pivotal moments of action in his work. Moore was named "2005 Sport Artist of the Year'' by the United States Sports Academy and was the first Alabamian named in this international selection of artists. Also in 2005, he completed an extensive body of work known as "Iron Bowl Gold" that tells the story of the intense rivalry between Auburn University and the University of Alabama from 1948- 1988 through his 41 paintings. These works cover the "golden years" of the Iron Bowl at Birmingham's Legion Field, when there was a 50/50 ticket split between the schools. While most known for his depictions of college football, he has also been commissioned to create artworks for various organizations including the NFL, NBA, MLB, and PGA of America; as well as the United States Postal Service commemorative stamp series "Legendary Coaches" that feature Bear Bryant, Pop Warner, George Halas, and Vince Lombardi. A native of Birmingham and graduate of the University of Alabama, where he earned his Fine Arts degree, he continues to bring recognition to his state and its sports heritage through his work.

Senator Jabo Waggoner was recognized as the 2019 Distinguished Alabama Sportsman. Senator Waggoner has been serving the State of Alabama for over 46 years. He began his political career in the Alabama House of Representatives where he was first elected in 1966 and served until 1983. Since 1990, he has represented the 16th District in the Alabama Senate. He was named Minority Leader in 1999 and elected to the position of Majority Leader in 2010, when the Republican Party gained control of the Senate. He had the longest record of service of any legislator in the history of Alabama. He has served on the Board of Directors of the Alabama Sports Hall of Fame since 1993, is a member of the Birmingham Monday Morning Quarterback Club and is a founding member and past president of the Birmingham Tip-Off Club. Additionally, he serves on the Executive Committee of the Birmingham Business Alliance, the Faulkner University Board of Trustees, and the board of the Greater Birmingham Convention and Visitors Bureau. He was inducted into the Birmingham-Southern College Sports Hall of Fame in 2007 and was recognized as a Birmingham-Southern Distinguished Alumni in 2013.