In 2003, the LSU Tigers were one of three unbeatens at the end of the regular season.  In the AP Poll, the Trojans of USC were number one with LSU ranked second and the Oklahoma Sooners third.  However, the BCS computers had Oklahoma and LSU  as 1 and 2. LSU  and Oklahoma squared off in the Sugar Bowl in New Orleans.  Oklahoma had averaged 45+ points per game while the strength of LSU was its defense which was only giving up 10.5 points and led the nation in yielding an average of only 68.2 rushing yard per game.  LSU scored first with 11:38 in the first quarter.  OU soon tied the score with their own touchdown halfway through the second period.  Not to be outdone, LSU drove down the field for another TD and the halftime led.  At the start of the second half, the Sooners had received the kickoff.  Two plays later Jason White's pass was intercepted and returned for a 20-yard TD.

White was hassled all night by the Tiger defense being flattened with blitz's but still managed to keep his team in contention.  Jack Hunt's tip of a would-be game tying touchdown which fell off the finger tips of Mark Clayton in the end zone preserving a 21-14 Sugar Bowl victory.

Each limited edition print is hand-signed and numbered by the artist and is accompanied by a Certificate of Authenticity and gold seal to enhance framing.  The Signature Edition Lithographs and Artist Proof Lithographs are personally signed by Eric Alexander, Jack Hunt and Chad Lavalais.  Please allow 7-10 business days for completion of custom-framed orders.

Payment Plans
If you choose the Installment Plan option, you must complete your order by checking out through the Partial.ly payment button in your shopping cart.
• Place your item in the cart using the "Add to Cart" button (if the button says "Sold Out" there are invalid options selected - see explanation box above options).
• Complete check out using the Partial.ly payment option to set up your desired installment plan. 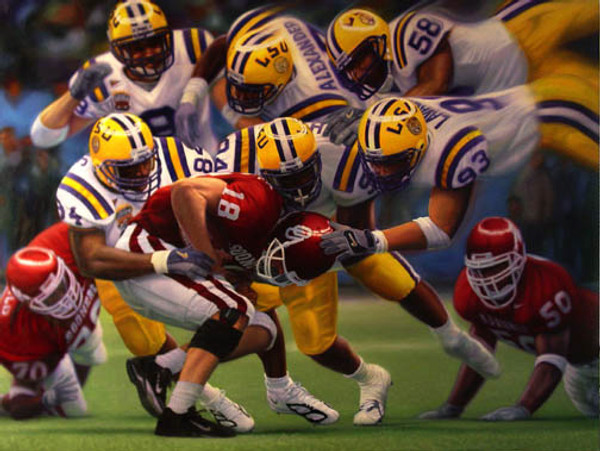 Your cart is empty.